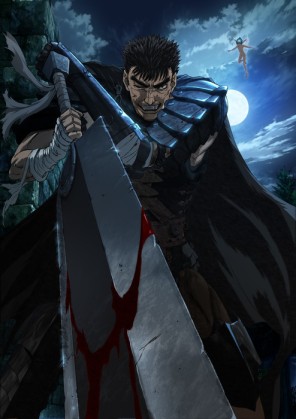 Taking place sometime after the Eclipse, Guts finds himself being hunted down by demons due to the brand on his neck. On his journey, he encounters Puck, a fairy who begins to follow him. Puck soon witnesses first-hand the horrors of Guts’ life when a monk and his daughter accompanying them become victims to the undead.

I was excited to hear that Berserk was getting a new TV series especially when I heard that it wasn’t going to cover the Golden Age arc since there was already a TV series and a movie trilogy that covered it. Now that it has started airing, how was the first episode?

Let me start with what I didn’t like about this episode: the CGI. It feels like it belongs in a PlayStation 2 game instead of an anime. Also, in my opinion, it feels out of place when it’s being used like whenever someone does something, or when a CGI object or person is in a hand drawn environment.

So, what did I enjoy about this episode? The first thing is that it aspects its viewers to be already familiar with this franchise. For someone like me who have read the manga and/or have seen the 1997 TV series and/or the movies, it’s nice to not have to sit thru some explanations for those who haven’t.

Another thing is the traditional animation. It’s like they took the art style from the manga which I really like. I do wish that they just use this type of animation throughout the episode instead of using CGI half the time.

As for the voice acting, I didn’t have any problems. Hiroaki Iwanaga, who voiced Guts in the movies, has reprised his role as Guts. There is one thing that I hope will happen when this series is release on DVD and/or Blu-Ray here in the US which is that it comes with bloopers. The reason for this is that I really enjoy the bloopers in the 1997 TV series.

If you want to leave a tip, then click here.